Alternate title: Why catering your own wedding *isn’t* your best bet.

Welcome back to what I hope to be the epic conclusion of my first post, in which you were regaled with a thrilling recount of my/our romantic history and all of the details about our soon to be dream big day. We’ve done a lot of things since we last talked weddings-survived a delightfully full summer of great tunes, new friends,

grand adventures, kick ass food and a lot of gettin’ hitched (both personally and professionally 🙂 And here we are-I’m delighted to tell you about the best day of our lives, that also happened to be a glorious shit show for the books. (All the more thrilling a tale to regail you with, my dear).

So what have I learned during this time?

Many bad things, all during the reception.

Our angel  “person of honor” Tam, took Daisy to an emergency after hours vet, but had to miss most of the party. Thankfully Daisy had a near complete recovery, but we missed a big part of the fun due to a sick pup. Realistically, it might not have been any better if we were apart from her when it happened-moral of the story, have plants not pets. Just kidding, we have a million pets and think you should too.

Okay, so here is the part where I gloss over all of the behind the scenes disaster/hilarity and I recount our wedding like you’re reading it in a magazine. Why? Because no matter how cynical I was about matrimony, I read the hell out of every wedding story I ever got my hands on. So…in all it’s “glossing over reality glory”…. 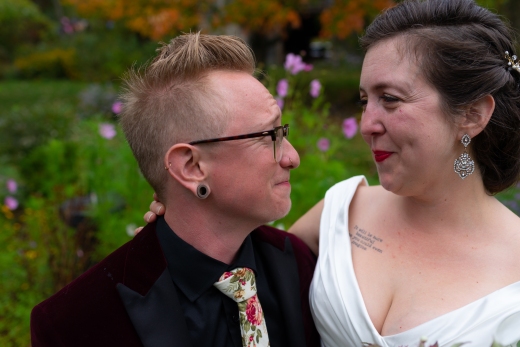 The setting: Light rain set the tone for the nuptials on this lush property on the banks of Loughborough Lake. Guests assembled in an old barn surrounded by mature trees, beautiful flowers and the rolling hills of  the Canadian sheild. 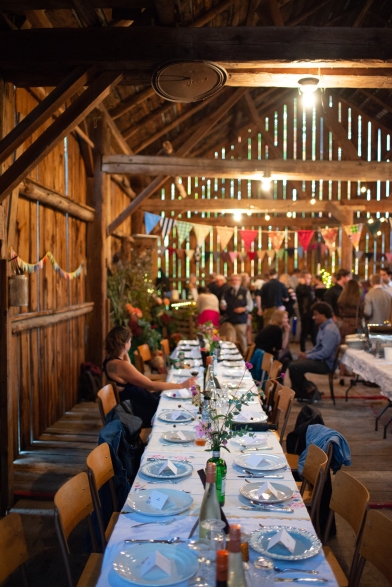 From the rafters were strung rainbow bunting, hand made by mother-in-law Sandi and one of her best friends.  Tables were set with embroidered antique linens, fine china, and exquisite glass and serving wear from Radford’s grandmother’s collection.

Our fancy hair came from: Jenni from Chic Salon 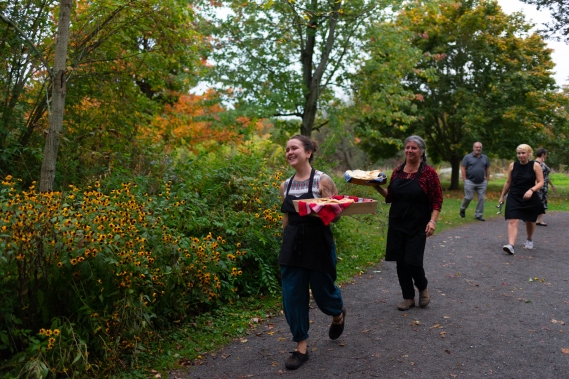 Floral Arrangements and bouquets by: Brock Jones Crow and Julia Muth. Friends of the bride and groom (Brock walked by the patio we were having our first date on, sat down and essentially never got up. And here we are)

Truly incredible, our floral arrangements were all organic, local, seasonal and lovingly collected. 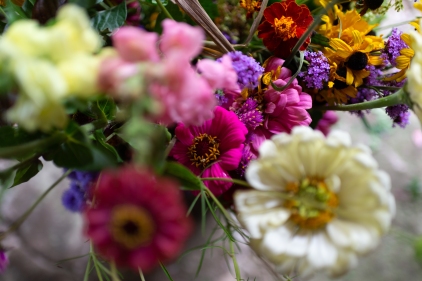 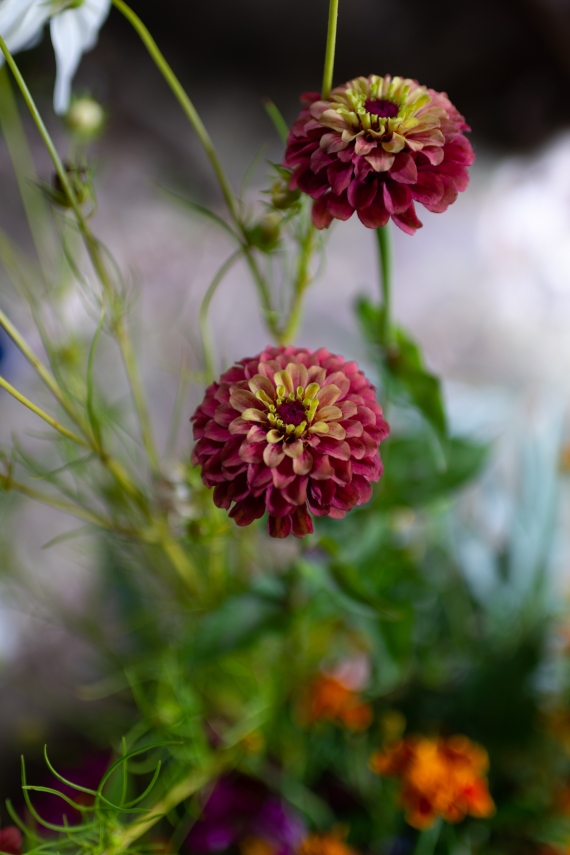 They were created with plants in our yard at home, as well as a huge selection of Tam’s edible flowers, kale, herbs etc from Real Food Gananoque. Tim and Tracy from Main Street Market also showed up with lush food/flowers aplenty. Much of our bouquets were edible, using huge stalks of Brussels sprouts, amaranth, and kale to honor of our love of food. 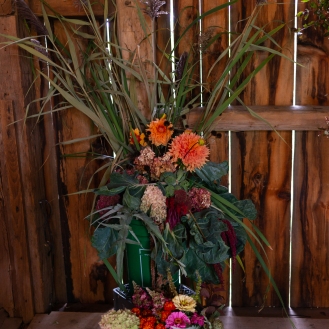 My gorgeous dress: From Bridal Creations who, despite my best efforts to purchase a dress second hand, got me on a “just trying on for size” love at first sight scenario.

Photography by: Liz Cooper Photography. I feel like her work speaks for itself. We also had the pleasure of catering her wedding this February and she’s a really, really lovely and talented human.

Wedding planner extraordinaire: Heather of Bowtie Events. See above description on how she was one of the best choices we made.

Officiant: Katie Rose Buckley was a breath of fresh air to find after an acquaintance declined to marry us because it was against their religious beliefs. Ouch.

Katie helped guide us through a non religious ceremony that wasn’t quite “vows in a canoe” like Rad had wanted, but was personal and wonderful in the barn as the rain fell.

Sounds: We had Barb McDougall who is in my (and probably more professional people’s more legit) opinion, a musical savant- play guitar and sing during our ceremony and reception. She has a deep and powerful voice, and hearing her sing my favorite song while I walked up the aisle was all together too much. We heard her first at the market that we also work at, and she has before(and since) made me weep while making lobster rolls, so of course I was a damn mess.

My wonderful friend, Lynette (previously of Sleepless Goat fame) played a strong hip hop set, with many an Elton John request from Lola.

Non-Conventional touches: We’re fortunate to be involved in the thriving arts and maker community here in Kingston. One of our talented friends, Barb, made us a prayer flag banner to which people could add wishes (and random quotes, and bathroom words because my friends are children), while re purposing scrap materials. ( We really *really* wanted to do our best by the environment for this day.)

Instead of a traditional garter and bouquet toss,

We had all people regardless of gender and marital status (because gender is a societal construct, and because being single is awesome and important and romantic love is fetishized by our culture *stepping down off soapbox) come together and threw  a stuffed dog-who ever caught it would be the next to get a pet.

Where the bride and groom honeymooned: We have a three part honeymoon because we own a business and can’t actually get away for long. Part one: Foodie adventure to Canoe (54th floor of the TD tower in Toronto) and dress up for her. Part two: off grid living at Ravenhouse outside of Gananoque for him. To come, leaving North America!

Wishes for the future: That food continues to taste as sweet, passion for life/each other/adventure/growth/fun continue to blossom for a lifetime.

Thanks a million for your love and well wishes friends. We were and are to this day humbled and honored to be part of your community and lives.